A zombie enters town, looking for some brains and other fleshy parts of living human beings. He’d likely bite a person or two at the gas station right in town, or maybe head into the A & W if he could manage the doors. The cops show up, beat the zombie down, hand cuff him, and haul him off to jail. But, they two gentlemen who were bit at the station soon turn into zombies. The next person, a petite girl, comes into the store and gets bitten by the zombies, and, unfortunately for she gets eaten as well.

Here is where our problem starts. The zombies eat the girls brains. She doesn’t rise up to haunt the night. A couple of teenage boys enter looking to score some beer. The store clerk is on the floor eating the last bits of the girls toes, but is having a hard time chewing because of the mass of hair caught in its throat. Eating brains is not easy. Stunned, the boys do nothing for a moment and the zombies turn to chase living flesh. The boys escape, but one is bitten, and the zombies are now walking the streets looking for them, or anything else.

The four zombies stumble towards the bright lights of the grocery store. They freak a few people out in the parking lot. Honestly, four moaning weirdos really turns folks off. A couple minutes later they figure out the door is automatic. I say figure out, but it is sort of like a rock figuring out a river will make him smoother.

This only one cashier, of course, since it is a small town and people spend more money if they wait in line. The zombies descend upon the line of grocery shoppers. An old lady caught between two shopping carts and two of the zombies start in on eating her brains and other tender parts of her body. Which, lets be honest… old people are all tender parts. The zombies can crush a skull with little effort, so the brains are gone within a minute. The other two zombies are not so lucky. One grabs another lady and bites her, but her husband, a former linebacker punches it in the head. The forth zombie just gets caught up in a tangle of shopping carts of for sale items that aren’t really for sale, but with clever placement and a yellow sale make people think they are on sale.

Chaos seems to descend right? Not really, the people run from the store. Other folks in the store are not quite so lucky. Gawking at someone else’s tragedy is a basic human right. The two zombies finish with the old ladies brains and sense fresh brains get up and follow the third zombie after a mother with her child. The fourth zombie just thrashes about, covered in sticky soda.

The little girl is not as conditioned as her mother so she shrieks loudly and takes off. The mother, the epitome of Mid-Western sensibility starts to utter an apology for her daughter’s rude behavior, but the zombies get her and eat her brains.

The lady who was previously bitten turns a few minutes later and attacks her husband. He’s driving the car and 65mph down a back road. A moment later it is upside down and on fire. The wife does successfully eat her husband’s brains before the fire finally destroys her. Ironically, or perhaps just coincidentally, the husband had guessed his wife would kill him and eat his brains one day. He loved her just the same.

I haven’t been very clear. I’ll give you a hint in a moment. The four zombies eventually make it out of the grocery store a frustrating (for the zombies) and graceless roaming of the grocery store. The other shoppers fled, but no one remembered to call the cops, although there were some funny Facebook posts. The zombies move down the alley, moaning up a storm. The laundromat is closed, wouldn’t ya know it? Once never knows their hours.

A block away the zombies finally hit a human buffet. The local restaurant is just starting to pick up. If the zombies had any animal intelligence at all they’d go in separate doors. But, they have as much sense as teenage boy on the internet, so they all shuffle in the same door, momentarily wedging each other into a jam before spilling out into the room. A weathered local in a Carhart gives them a look. The couple nearest the door are quickly and a shocked moment passes before the zombies are attacked with butter knives and forks. One bold old lady smashes a plate across a zombie’s head, but only ends up cutting herself severely. Abruptly the melee madness over organic mixed greens with a cherry vinaigrette ends as the diners realize these are meth heads, or zombies. They flee, leaving behind the couple that were originally attacked and the old lady who cut herself. The zombies already had mouthfuls and only one of the survivors had been bitten.

The husband of the old couple was quite large, and shielded his wife from the secondary onslaught. His brains were quickly devoured, as were the old ladies who cut herself. But, the wife had already started to turn by the time the other zombies turned to eat her brain. And zombies are NOT cannibales, thank you very much. (Can-able, yes, with proper sterilization. Boil the packaged zombie meat in glass jars with loose lids for at least 60 minutes. Recipes to follow.)

One diner who had been bitten, but escape also begins to turn, but is quickly de-brained with a bent butter knife.

Population: Healthy, but needing a bit of sun, population: 1,480-something. Zombies: 6. Dead like Elvis overdosed on the toilet: 8. (Yeah, I confused my numbers, whatever.)

I’m sure we all imagine the great zombie apocalypse differently. However, what you may have not picked up from this rambling story is that zombies eat brains. Yet, you kill a zombie by destroying its brains (or possibly cutting of its head). So, for NEW zombies to be CREATED a human must be BITTEN and then ESCAPE.  If the human cannot escape they will have their brains eaten quickly, or if there are enough zombies they would eat guts and other fleshy parts as well. Human without brains means no zombie.

If the zombies aren’t crushed quickly, or if they hit a big enough crowd where they infect a lot of people quickly, but those people escape… it is possible to get a decent sized mob of zombies. But the mob itself would only generate more zombies if it found large groups of people. Nearly all other scenarios end with the humans being devoured.

A single zombie is dangerous, more likely to kill than create another zombie, but also much less likely to successfully attack someone as well… especially if it is known that zombies exist. Two zombies are a bit more likely to kill a person as one zombie, but the probably of creating another zombie is also increased, and the likelyhood of a successful attack on human is also increase.  I propose the follow:

Zombie(s) approaching to within a 5-yard radius.

As the group grows larger the likelihood of more zombies being created diminished greatly. We also have to assume that zombies will likely die from human violence visited upon them, as well as from natural, post-apocalyptic causes (fires, explosions, falling down manholes, wild dogs).

It seems clear that the average zombie “hoard” would number, on average, 21 zombies.

Now, of course you are asking, “what happens when two or more hoards meet up and create real hoards?” This would occur, but the main point is that, out of a 1,000 possible victims, you would only get about 21 or so zombies. The vast majority of people would be eaten, while many would escape.

So, maybe we’d see 30 or 40 zombies in my home town. That is a slow night for anyone with a half decent shot. 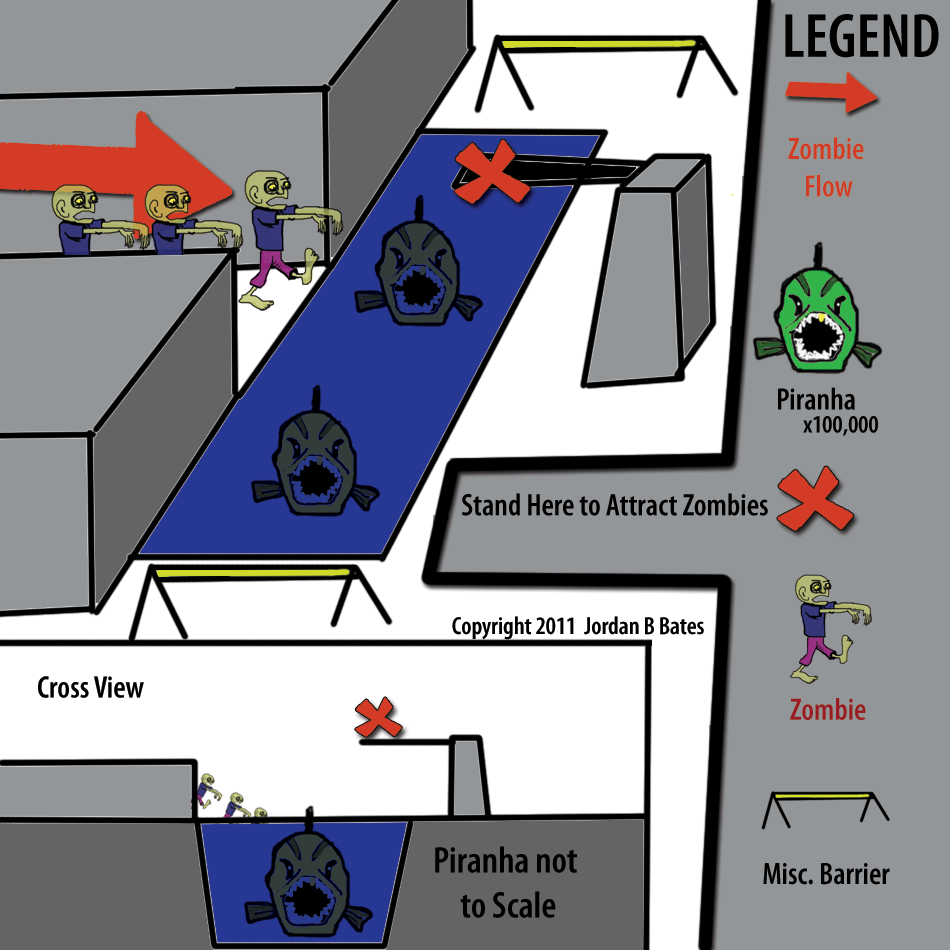